SAN ANTONIO – Legendary rocker Gene Simmons of KISS commented further in the ongoing war of words between rock and roll and hip hop and NWA’s induction into the Rock and Roll Hall of Fame.

The iconic rap group was inducted into the Rock and Roll Hall of Fame April 8 alongside various other rock artists including Cheap Trick, Deep Purple and more.

Simmons originally responded to NWA’s induction with a tweet that read, “Let me know when Jimi Hendrix gets into the Hip Hop Hall Of Fame. Then you’ll have a point @icecube.”

Respectfully– let me know when @JimiHendrix gets into the hip hop hall of fame. Then youll have a point. @icecubehttp://blabbermouth.net/news/gene-simmons-gets-called-out-by-n-w-a-during-rock-hall-induction-speech/ …

GENE SIMMONS Gets Called Out By N.W.A. During ROCK HALL Induction Speech

During N.W.A.’s induction into the Rock And Roll Hall Of Fame class of 2016, MC Ren addressed Gene Simmons’ comments about how the KISS bassist/vocalist is “looking forward to the death of rap.” “…

Ice cube immediately responded with tweets of his own to comment on Simmons’s response. 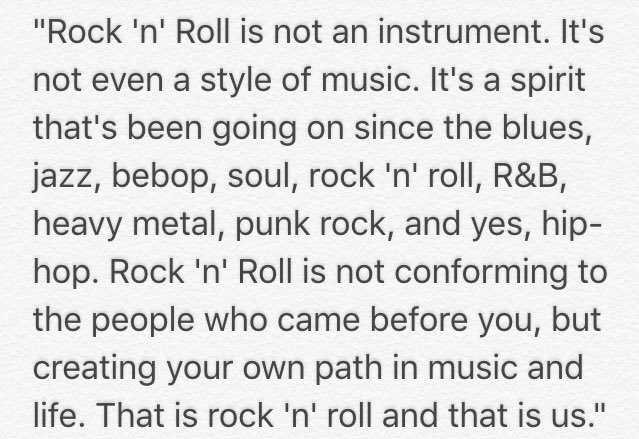 @genesimmons I repeat. And say this with a Kiss.

Stopping by for an interview with local lifestyle host, Esteban Solis of Daytime @ Nine, Gene Simmons weighed in on comments made by the iconic rapper and member of NWA.

In the interview, Simmons was asked what his favorite current artist was and Simmons responded swiftly.

Simmons responded, “My favorite is Ice Cube and NWA. What’s the big deal? I know Cube, we get along fine. He thinks NWA belongs in the Rock and Roll Hall of Fame, I don’t. I think Led Zeppelin should be in the rap hall of fame. Why can’t you disagree? I don’t agree. I don’t agree that Madonna should be in there, it ain’t rock.”

He added, “And if you ask these artists what kind of music they make, you walk up to Cube and ask what kind of music do you make? We’re hip hop artists, ok, I agree with you. If you ask Madonna, she’ll say I’m a dance artist or a disco artist. Ok, that’s cool. They won’t say we’re rock artists.

He concluded, “It ain’t rock!”

When asked if Run DMC was a rock artist when they collaborated on a track with Aerosmith:

Simmons added, “The Aerosmith track because it’s Aerosmith, was rock. So you can take a rock track and what you do on top of it doesn’t matter. As long as it has guitar, bass, drums, it’s rock.”

Simmons further clarified and stood by his original words that NWA was not rock and roll.

This article was originally published and featured on Fox San Antonio.